Because I love efficiency and performance I had been looking at getting a tuner installed in my truck for the benefits of better milage and performance, but the cost seemed to put me off. Eventually I ran into DPF issues and I was practically filling up at every gas station I came across. This started to get expensive really fast not to mention that the truck was essentially suffocating from the full DPF which hurt performance significantly. I finally got around to getting an SCT Tuner installed along with DPF removed and blocked off EGR along with a new exhaust system. It is estimated that it got around +50HP increase but the throttle response and fuel efficiency really shine. Note that this process may be illegal in your state as it involves removing all emissions controls from the truck but your milage may vary (pun intended).

So how much did this cost? The all in cost was around $1625. I knew the fuel savings would eventually pay for itself but when? Being the cost model nerd I am I turned to Excel for this. I started the calculations knowing that I was getting 9mpg and diesel is around ~$3/gallon. Now that I’ve had this for approximately 5 months, I can easily average 19mpg which is a huge gain in fuel efficiency. Using the same fuel costs, I estimate that I will recoup my cost at around 9500 miles which isn’t too bad at all! Below is the pretty table and graph I put together for this. 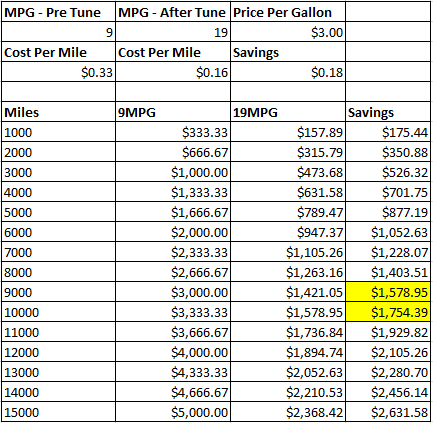 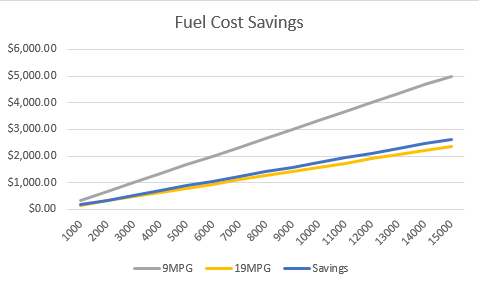